A belated #GivingTuesday wrap up

This is a long overdue wrap up of our 2013 #GivingTuesday efforts for our client, National Park Trust (NPT). Somehow the holidays came and went and then when the new year hit, we were (and still are) knee deep in work.

The good news is that for NPT’s first year participating in #GivingTuesday and with only a week or so of planning, they were able to beat their fundraising goal by almost 200%.

Only in its second year, #GivingTuesday is a new movement of charitable involvement. Designed to be a followup to Black Friday, Small Business Saturday and Cyber Monday (not to mention the crazy people who actually shop on Thanksgiving), it’s a campaign that raises the relevance of “giving something that means something.” (That was the actual name of the American Red Cross 2011 holiday campaign, one of our clients. The name is so perfect, but it really applies to all nonprofits/causes.) Sure, shop for your friends and family. But also help someone you may not know by giving to your charity of choice. This year, 10,000 nonprofits participated in #GivingTuesday and Blackbaud processed 19.2 million in donations, 90% more than last year.

For NPT, our promotion started about 2 weeks before 2013’s #GivingTuesday on December 3rd. We focused primarily on board involvement, email outreach and Facebook/Twitter posts.

First, we supplied the board a template letter that we asked they customize slightly and send to 13 of their friends. NPT told us that a good majority of donations came from board relationships which caught us by surprise. By giving the board something they could easily do, they actually did it. And NPT reaped the rewards.

Second, we created a series of 3 emails that went out on 11/20, 12/2 and 12/3. Since this was NPT’s first-ever #GivingTuesday and first-ever solicitation for donations of their email database, we didn’t want to go overboard. On December 3rd, our appeal to donate was accompanied by a story of impact to illustrate what a donation to NPT means. We featured Lloyd Meeks, a young student from Baltimore, MD, who through his many trips to parks with NPT soon realized that having a safe place to play outdoors was not just important to him but also to his community. He was inspired to lead the initiative to renovate a local park near his home. What an inspirational kid!

And we didn’t leave Social media out. We prepared a campaign that started on November 18th and included participation in the #unselfie trend.

Most visible was an infographic we created to drive home what a donation of even $20 can do for NPT. It received a lot of great feedback. 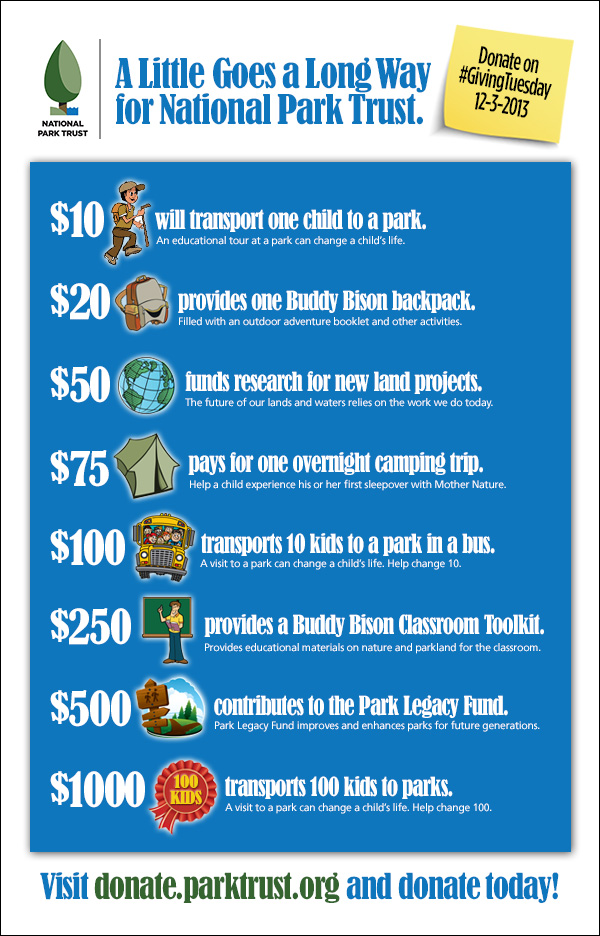 We probably could’ve set our goal much higher, which we will do next year (I feel a 5-figure number coming), but we wanted to start with something realistic and catchy. It also became obvious that with more time, we could provide more and better resources to the board so they can promote their involvement with NPT through #GivingTuesday. We’re excited to use our experience to build a better campaign in 2014, but we’ll have to wait at least 321 days for those results. Until then, happy #GivingTuesday planning.