Times are a-changin’, folks! We have phones with touchscreens, we watch movies OnDemand and listen to music in our cars via Bluetooth. While the rest of the world, including broadcast stations, have been pushing the technology barrier, PSA (public service announcement) distribution has been stuck in the ice ages.

About 5 years ago, as stations were transitioning to HD, a client asked us (practically begged us) if we could just send their TV PSA spots on jump drives and abandon the Beta SP tape. Unfortunately, the answer was no. Very few stations were willing to accept anything but a hard-copy tape. It was old fashioned, but it worked like a well-oiled machine. Since then, we’ve been surveying PSA Directors yearly to track the changes and advancement in PSAs. And I’m excited to say that we’ve made progress. 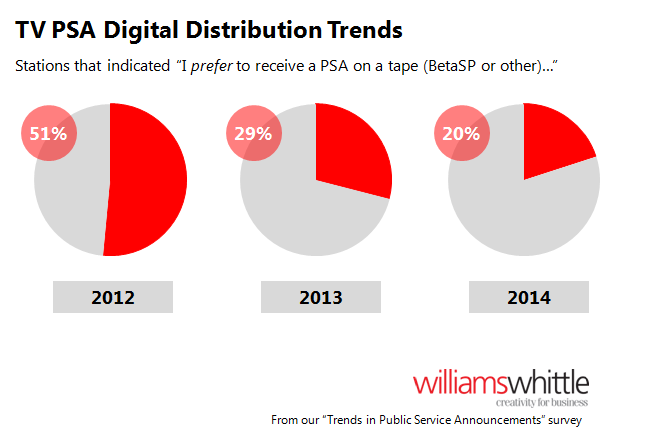 You can now digitally distribute your PSA to TV stations and feel confident that your spot has just as much of a chance of making it on the air if you had sent it on a tape. In 2012, 51% of stations said that they prefer a PSA delivered to them on tape. Two years later, only 20% of stations said they prefer tapes. Now, that’s a huge improvement.

We are about to launch the 2015 PSA survey and I will be bold and predict that the percent of TV stations that prefer tapes will be less than 15%. And let me be clear, even if they prefer tapes, that doesn’t mean they won’t accept digital spots. They will; you just have to alert them (don’t assume that they will just stumble upon it) and make it as easy as possible for them to get the spot into their ad system.

Is this a game changer? Yes and no. While it cuts down on the amount of wasted plastic (tapes) and mailing costs, there is a still a cost to digitally distributing spots. And it still needs a coordinated effort to get your spot out to stations, but gone are the printing costs, the mail fulfillment process and a trip to the post office.

I haven’t forgotten about radio. It turns out radio stations have been on the digital bandwagon for quite some time. They work with simply and effectively with MP3 files that they can easily transfer them from their email to their ad system. If you’re looking to distribute a radio PSA, it’s a no brainer. Go digital.

Stay tuned for the 2015 results and see if my predictions are right.