Gore Vidal and Me

In 1990 I traveled to Singapore for an ad agency Network meeting. After Singapore, I made plans to spend a few days in both Hong Kong and Bangkok.

Bangkok was then—and no doubt still is—a crazy place. It was the loudest, most raucous, smoggiest and most fascinating city I had ever seen. To call the streets busy would be like calling a tsunami wavy.

Was it the uniformly 5’1” bellmen dressed in white with green piping and pill box hats parading up and down the beautiful lobby carrying standards with two bells tinkling off the bottom that announced messages for the guests? (And is this why they’re called bellmen?) Was it the mahogany wood everywhere you looked? Was it the interiors that were so pretty it made your eyes hurt?

Or was it the history of the hotel? All of the wings were named after famous authors who had stayed there. The Somerset Maugham Wing. The F. Scott Fitzgerald Wing. The Ernest Hemingway Building. The Gore Vidal Extension.

My answer came during my second day at The Oriental. I was poolside reading “Hollywood” by Gore Vidal. The book had a garish yellow dust jacket; it was unmistakable. I peered over the top of the book to find someone across the pool staring at me. It was…Gore Vidal.

This, I thought, is why The Oriental is the Best Hotel in the World. 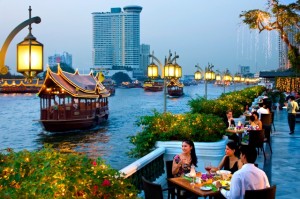