The Mayor of Hollywood

Tales from a Mad Man

One in an Irregular Series 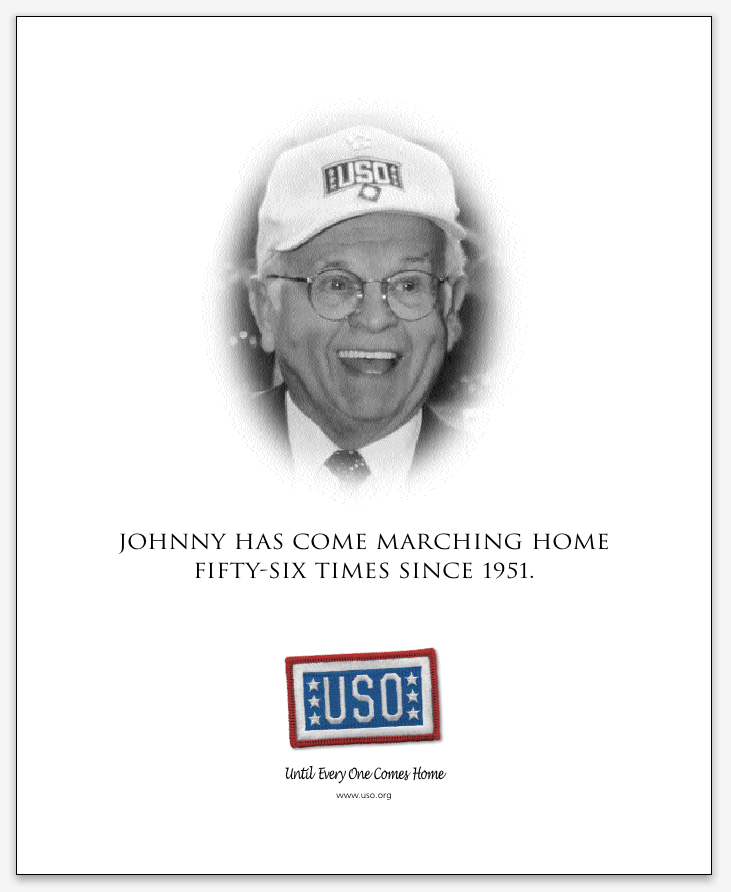 An homage from the USO to the Mayor

Johnny Grant was the Mayor of Hollywood from 1980 til his death in 2008. Since Hollywood is a neighborhood, not a city, the position of Mayor is honorary and ceremonial. Other Mayors of Hollywood have included Charlton Heston, Monty Hall and Betty White (in 1954!).


Since the 40s, Johnny had been a Hollywood fixture and in many circles he was The Face of Hollywood. No, he was never a movie star. He was a promoter, a friend and advisor to the stars and, above all, the Majordomo of Hollywood. For decades, he served as a walking, talking archive of all things Hollywood from his apartment in The Roosevelt Hotel.

One of his jobs was to organize, nominate, elect and preside over the Hollywood Walk of Fame where notables from Mickey Rooney to Marilyn Monroe to Charlie Sheen put their handprints in the sidewalk concrete near what used to be called Graumans Theatre. During his Mayordom Johnny would be front and center at these ceremonies, beaming at the paparazzi, the fans and the stars. Johnny knew the fuss wasn’t really about him, but he enjoyed these moments more than anyone because they brought attention to his beloved Hollywood.

I met Johnny through my client, the USO. Johnny had the distinction of going on more USO tours than just about any other soul, including Bob Hope. What was his talent? It seemed to be the art of telling stories, stories of Old Hollywood–the stars he’d met, the times he’d had.

And that’s what I got from him in one of the most intense hours I’ve ever spent with anyone.

Williams Whittle was the Agency of Record for marketing the USO and its Mission. One of our chief strategies was to create and place public service announcements. Our most important target audience is always the TV and radio stations’ gatekeepers, the PSA Directors. So, we would do semi annual road shows. In the case of LA, we held a breakfast at the Ritz Carlton (my client and friend, John Hanson, and I were staying at the Hyatt down the street; the USO is a nonprofit, after all).

The media folks–and Johnny–were invited for 8:30. At precisely 7:50, Johnny and his entourage from the Chamber of Commerce showed up.  Oh Lord, I thought, we’re gonna have to entertain them for 50 minutes. To make matters worse, there was a major traffic event on the Freeway so the gap would likely be longer.

After introductions, there must have been a cue from the C of C boys because Johnny launched into a story about the time he, Spencer and Kate ran into Mr. Hughes at the Brown Derby, and-whoa-you shoulda seen the look on Spencer’s face ’cause y’know Howard and Kate had been lovers, and Johnny was best friends with all of them and….

Fourteen more stories and, as they say, hilarity ensued.

Most of the tales began with “…Sinatra and I were at his villa in the desert…” Or, “y’know, you had to be patient to really get to know Bogie…” Or, “Ronnie (Reagan, I assumed) and I were great pals, nobody knows this about him…”

By this time, Hanson and I were sitting at a table with the good Mayor waiting for him to take a breath, which he never got around to. He was a rolypoly 80-something with a twinkle in his eye, holding court as he had done in that town for 60 years.

Then came the piece de resistance.

“I remember in ’58 when the Dodgers moved to town like it was yesterday”, he started. (No one had asked about baseball).

“Of course, we had to play in the old Colosseum, there were no lights. O’Malley called me and asked me to be the PA guy for the first game. Happy to do it. Well, with all the pomp and circumstance,  the game started late. So by the eighth inning it was getting dark. I had the bright idea that everyone should get out their cigarette lighters and fire ’em up. Every little bit of light helps, y’see. So there’s this whole stadium filled with twinkling lighters and dontcha know that today’s young folks…”

Hanson and I looked at each other with the same thought: Is this going where we think it’s going?

That was the last story the Mayor of Hollywood and Inventor of the Concert Lighter Tradition had time to tell us that day.

What he said about Bing, I’ll say about Johnny:” What a guy!”

Footnote: Johnny Grant was the Mayor of Hollywood until his death in 2008. He has not yet been replaced.