Build Relevance for your Nonprofit’s Message in Commemorative Months

Every few days I read an email, a webpage, a press release or a tweet that says something like this: “In support of National Widget Awareness Month, ABC Nonprofit and XYZ Corporation are teaming up to raise awareness of MNOP.”

What do commemorative months do for your nonprofit?

Commemorative months allow nonprofits to gain national awareness because their relevance is heightened during that time. Awareness is what makes a cause relevant. The more people who know about you (think National Breast Cancer Awareness Month and Susan G. Komen), the more your cause will gain attention, momentum, engagement and action. But, as marketers, we also want the equation to work in reverse; raising the relevancy of your message, leads to greater awareness. This is especially key with the press – it gives them a reason to cover your story and share it with the masses.

I received a press release for National Internet Safety Month a few weeks ago. Time Warner Cable was announcing their partnership with Common Sense Media to help kids stay safe online during the free-wheeling days of summer. Their goal is to help raise awareness to moms (like me) and dads about internet safety. And not during just any month–during “National Internet Safety Month” when kids are let out of school and have lots of times on their hands. I believe they will successfully “earn” awareness on this issue in June because of the relevance of their messaging; the media wants to cover helpful, summer-specific stories.

What if there isn’t an existing timeframe where that your nonprofit can use to raise brand relevance?

The answer is – you can create one. Here’s a personal story.

Our agency had achieved significant success for our client, USO, in Public Service Announcements (PSAs) just in the first five years of the campaigns. But, in 2008, we began to hear that stations were inundated with requests for PSA placement. We heard from a few TV stations they received a dozen requests a day from good causes pleading for airtime. Along with the fact that we were facing a public worn down with war fatigue, a country distracted by a historic presidential election and “competition” from more than 500 other worthy causes vying for PSA attention in the media, we knew the only way to get through the noise was to create a compelling reason for PSA Directors to give preference to USO spots.

We rose to the challenge and created a way to elevate the USO’s brand relevance– by establishing a national season for patriotic observance. The Patriotic SixTM. The Patriotic SixTM is the six weeks beginning with Memorial Day, running through Flag Day, culminating in Independence Day.

While you could argue that this timeframe already existed, we created its identity. The Patriotic SixTM provided a distinct promotional time period that resonated with the stations for two reasons.  First, it fit within their infrastructure, providing an easy-to-program six-week flight.  Second, it appealed to their patriotic nature, and gave them a logical reason to select the USO’s PSA over other worthy causes.  The Patriotic SixTM was received easily and naturally as if it were a long-established, national tradition. 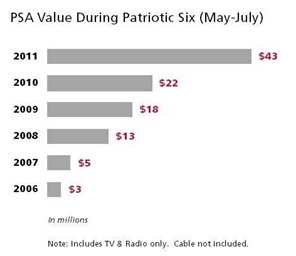 In the Patriotic SixTM time period, television media value was four times the amount of the previous year, going from $5.1 million in 2007 to $13 million in 2008. Four years into our Patriotic SixTM campaign, in 2011, we earned $43.4 million TV and Radio PSA value in just May, June and July; evidence that we successfully created a timeframe that raised brand relevance. And in turn, more awareness for the USO.