For National Park Trust (NPT), 30 years of service equals 200 (yes, two-hundred!) projects that have served to preserve, protect and enhance our nation’s system of parks. The mission to preserve our lands has been, and will always be, at the heart of NPT, but as the organization grew, so did their projects – both in scope and in type.  Just a few years ago, they extended their mission to focus on the future stewards of park preservation. Through the creation of a national day encouraging children and explore parks through play, called “Kids to Parks Day,” they’ve gained participation in just four years of more than 500,000 people. And their educational program, the “Buddy Bison school program,” which helps underserved children learn about land preservation through project-based learning, has touched more than 25,000 young lives.

Amidst all of these changes it was obvious that their visual brand identity was not communicating this new exciting scope. So, they took their then-current logo and added a child. (see below)

Case closed…or so they thought. The quick editing of their logo was instead causing more confusion among their stakeholders about their identity. Were they not all about land preservation anymore? Why was there a child in the logo – was it because NPT now was serving youth? Does the emphasis on the words “Park Trust” in the logo imply that you’re now just endowing park projects – for the enjoyment of children?

Enter Williams Whittle. We quickly realized that we needed to create a visual mark that was strong enough to uphold their tradition of land preservation and fun and modern enough to incorporate their education programs like Buddy Bison and National Kids to Parks Day. This would require a completely new look.

We started with a group exercise to help bring the leaders of NPT to a consensus on their core narrative – the one succinct and differentiating statement about NPT that would be easy for anyone to remember. Here are some of the highlight conclusions that we uncovered at that meeting:

From there we started our internal creative process, starting with the logo and following with the tagline.  Using the guide that a “logo should not literally describe what a business does but rather, identify the business in a way that is recognizable and memorable,” we initially explored four different concepts. Even at the earliest of stages, we all gravitated towards this mark:

It stood out from the rest and it certainly stood up to logos from the most recognizable brands in the world. You can see their original logo gets lost (below), while the new logo makes a bold statement and holds its own among the other iconic brands.

And NPT felt the same way. The color-blocked stylized tree is playful and modern. And it represented the land and the water; the types of projects that NPT helps to preserve and protect.

We then moved onto the tagline. Our guiding principle was that a tagline is a slogan that succinctly, memorably, and descriptively sums up a company or product. It should:

Although we came up with several options for NPT, the tagline that we kept coming back to, and proved to be the winner (after many discussions and debates) is Treasure Forever. Not only did we like the double entendre, treasure can be used as a verb or a noun; the personal act of treasuring our parks or the value you can hold of treasuring our parks. We presented the logo and tagline in several media for NPT to see – in an ad, on a business card and incorporated with the sub-brands. And then, we also wanted to present the tagline in a more vision-like statement.

To us, the tagline was the icing on the cake (or logo, in this case.) Together, the new brand mark and tagline encapsulate what the board originally tasked us with: show how NPT brings together our youth, park projects and park goals in a unique way that paves the way for the future enjoyment of all parks.

In May, NPT staff and Board of Directors chose the final design. Drumroll please… 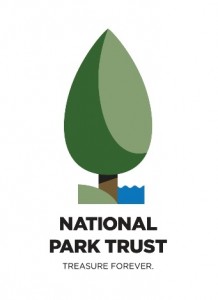 We’re proud of the new mark we created, but it doesn’t stop there. Williams Whittle will be helping NPT with their social media strategies and tactics for the 2014 National Kids to Parks Day. Stay tuned!