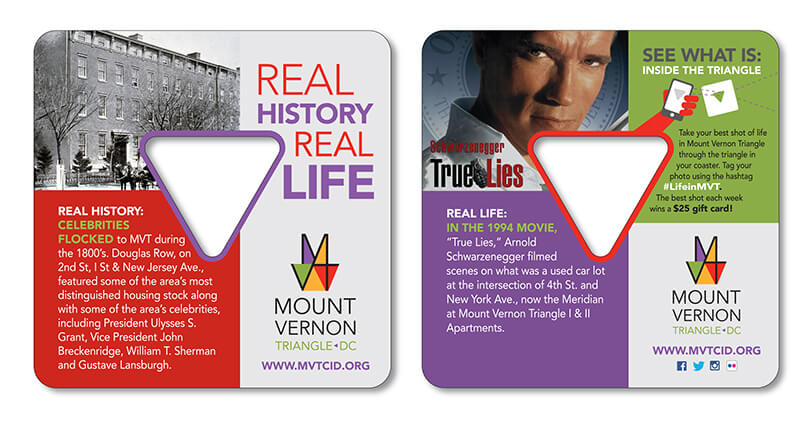 The Mount Vernon Triangle Community Improvement District (MVT CID) has launched an interactive campaign to tie the neighborhood’s exciting future to its rich past. Themed “Real History, Real Life”, the series of brightly designed coasters shares 10 stories from the Triangle, with one side of each coaster portraying a historical moment from the past and the flip side of the coaster depicting the vision for today and tomorrow.

The coaster series brings to life the rich history and lore of one of the most active and historically impactful communities in Washington, DC. 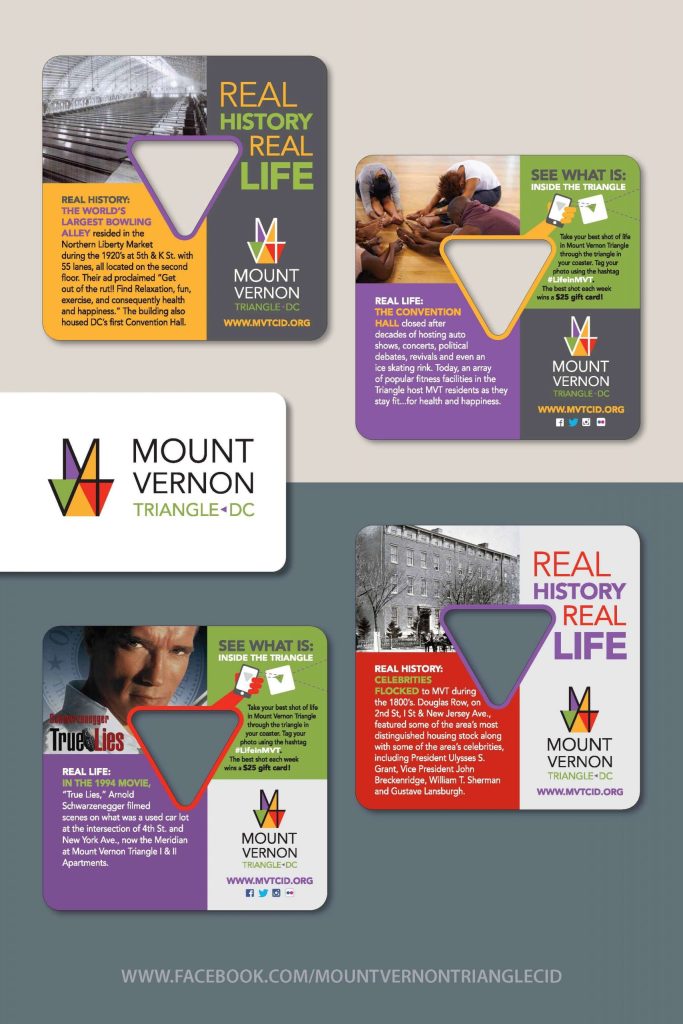 Follow the campaign online with the #LifeinMVT hashtag. The coasters have a removable triangular center. The MVT CID invites users to open it, take a photo, and share their view on social media, putting their own perspective on history in the Triangle neighborhood. Residents, office workers and visitors are invited to participate in the social media campaign, posting their pictures to Twitter or Instagram with the tagline #LifeinMVT. Each week, the staff at the MVT CID will award a $25 restaurant gift card to the person with the best photo. Click here to view activity on our Tagboard.

MVT CID President and CEO, Kenyattah Robinson, commented on the importance of maintaining historical context even as the community experiences explosive growth in its office, residential and retail development, saying, “Mount Vernon Triangle today reflects not only one of the fastest growing downtown neighborhoods but also its years as one of the original downtown business and residential communities in Washington, DC. As a Mount Vernon Triangle resident, I am both proud and thrilled that we have found such a creative, fun and inclusive way to weave together the rich historical fabric and history of the community to the new and exciting developments to come.”

The MVT CID extends its appreciation to Anne McDonough, Library & Collections Director at the Historical Society of Washington, DC for her tireless efforts to help the MVT CID with the location and identification of key images for the coaster project and to Executive Director, John Suau, of the Society for supporting this effort. Suau noted, “The interactive feature of the MVT CID coaster project really resonates with me, both as a Mount Vernon Triangle resident and as the Historical Society launches its Street Photography Series, which encourages Washingtonians to document and seek the historical context behind neighborhoods across the city. We are pleased the MVT CID is bringing to area patrons a sense of what once was, through historical photographs from our collections.”

Brent Leggs, a historic preservationist and Senior Field Officer for the Washington DC Field Office of the National Trust for Historic Preservation, noted, “Recognition that people living and working in a community value the context, history and story behind a place is part of a broader narrative and a priority for the National Trust. We are pleased to be working with the MVT CID in celebrating the diversity, authenticity and cultural richness of the Mount Vernon Triangle community and preserving the stories, culture and life histories of the neighborhood.”

Local design firm, Williams Whittle, was retained to design the coasters and the campaign through an RFP process in late 2015. Months of research and interviews elicited many historic facts – and fascinating tales – from a downtown Washington, DC community that has grown and thrived for hundreds of years, and that continues to evolve today. See the full gallery of all 10 coasters here.