In May 2018, Williams Whittle (WW) was retained to create a marketing outreach plan, media strategy, and an ad campaign for the 40th Anniversary of the Interfaith Council of Metropolitan Washington (IFC).

The goal of the 40th anniversary campaign is for IFC to renew its efforts to bring together all faith communities, becoming a united voice that encourages respect and dignity for all.

WW developed a campaign featuring poignant black-and-white portraits of people of faith with a quote about what they respect regarding another faith’s values and traditions in a lighthearted and fun way. The call to action to become an IFC supporter features the tagline and hashtag #AllFaithsOneFamily. 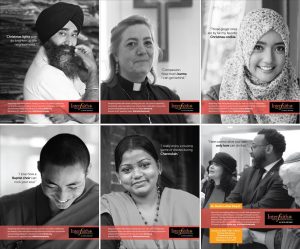 When the tragic events occurred at the Tree of Life Synagogue in Pittsburgh in October 2018, WW set out to demonstrate solidarity and support for the important and sensitive issue of fighting religious intolerance. The agency’s work with IFC is now pro bono.

Since then, WW has developed event ads, flyers, a brochure, email blasts, ad banners, social media posts, Facebook advertising, a bookmark, a 40th anniversary video, a tagline, a new logo and brand identity. A testimonial campaign and a social media video are also in the works for 2019.

Rabbi Gerry Serotta, Executive Director of IFC, offered this evaluation of our work: “The product created by Williams Whittle was top notch in every way. Their professional advice is sound and insightful, and the materials they have created are compelling.”