If there were a new business consultant’s Hall of Fame, Stuart Sanders from Richmond, VA, would be on the first ballot. I first met Stuart when I attended an Ad Club “Early-Bird” breakfast at which Stuart spoke.

He told the story of an ad agency that had pitched an account to a prospect and had thoroughly botched it by talking about “nuts and bolts” when all the client wanted was to be dazzled. The agency had misread the prospect’s personality profile. I realized that he was talking about Williams Whittle. Not in general, but I was hearing a specific case in which we had lost the pitch.

So, I signed us up for his Personality Profile course, which is a Myers-Briggsesque take on selling services. We were thoroughly entertained that day by Stuart. He is a large, good-humored, passionate man with an extreme southern accent. And he knew what he was talking about. We use his Personality Profile system to this day. In fact, we later had a second opportunity with the same prospect and won the business handily.

Over the next two years, we hired Stuart to teach us some other tricks of the trade, including a unique approach to focus group testing called Benefit Testing.

Stuart had been making inroads into England with his new business proselytizing and had arranged to put on a “New Business Summit” in London that January. The format was for Stuart himself to be the keynote and to round up experts in various disciplines of advertising, ranging from financial management to how to conduct an agency tour to research. He asked me to conduct sessions on Benefit Testing. 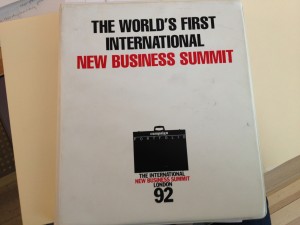 Stuart is not a subtle man. He promoted the Summit as though it were the most important conference on advertising to ever take place in England. Campaign Magazine, the English equivalent of Ad Age, was the co-sponsor so the Summit and Stuart personally got plenty of ink. There was even a skeptical editorial about this brash Yank who presumed he could teach the Brits how to ply their profession.

The day came for the conference. We speakers were in the overflow audience with what seemed to be the entire London, if not the whole of the Great Britain ad community, all waiting for this brash Yank they’d heard and read so much about.

I wondered how Stuart was going to play it. Would he tone it down for the audience? But Stuart, notwithstanding his Personality Profiling, knew only one way to go.

He entered the auditorium and, eschewing the podium and even the microphone, bellowed, “I LOVE NEW BID-NESS!!” The audience tittered nervously, many seeming to cringe at this affront. This was the ultimate Ugly American! But over the next hour and a half, as Stuart told war story after war story, teaching his Personality Profiling, the audience was spellbound. They were learning something new, something useful.

He’d never been better, and I was proud that day to be an ad man. An American ad man.