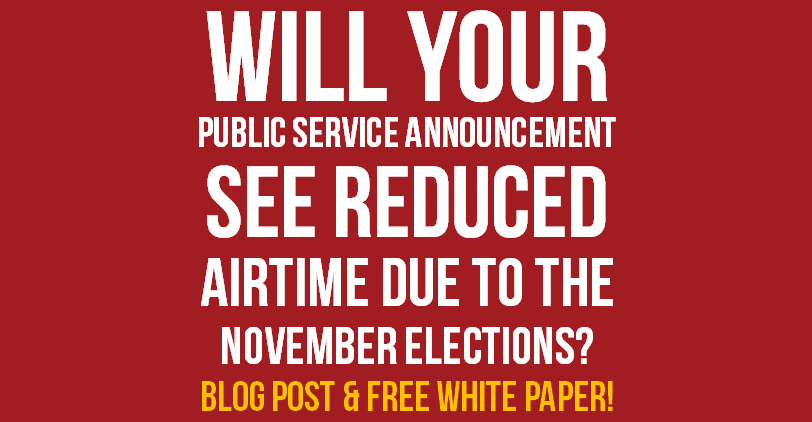 PSA Exposure During an Election Year

In presidential election years, the most frequently asked question we get is, “will my PSA see reduced airtime due to the November elections?” We’ve even heard of nonprofits completely forgoing a PSA during an election for fear that they will receive no airtime! Because Presidential elections come only once every four years, their impact on media availability is assumed to be unknown. We thought it best to not go on assumption and let the data do the talking.

While there is sure to be excitement and controversy in the election news cycle (hasn’t there been enough already?!) there will be, no doubt, plenty of advertising messages to be placed. That is a guarantee. But, will that completely push out PSA messages? To get a well-informed answer, we analyzed how this has affected PSA airtime in past elections. We looked at the data of two particular clients who had regular, yearly PSA campaigns running full calendar years before and after the election.

Year over year, PSAs receive different levels of coverage per station and per market for an unending list of reasons – station commitments, local news events, natural disasters, PSA directors’ personal commitments, etc. One year, your PSA might get oodles of airings in one market and the next year see a big decrease; and not because your message is no longer relevant, but because of factors out of your control. That’s the nature of securing free media.

So, when we look at it from a 10,000 foot view, the increase and decrease of a PSA campaigns’ airings the years before and the years after an election look very similar for both clients. This data indicates these fluctuations happen equally for all campaigns year over year and the election year was not and outlier.

Our takeaway: the factors that affect PSA airings in each particular market are equally felt by all PSA campaigns vying for avails. Your PSA has an equal chance of getting on as long as you do everything you can to get your cause in front of the PSA Directors.

Drilling deeper, another assumption is that airings would be affected in highly contested states (or swing states), where candidates flood the airwaves with messages in an attempt to influence the vote. In 2008, there were 11 states where it was anybody’s game and the nation watched with baited breath whether those states would end up red or blue.

Our takeaway: PSA availability during primary time is that it is unpredictable per market and per state, especially swing states, so be sure to promote your PSA in between those times.

Note: We drill down further into many more analytics. Download the white paper to get the full report.

In our annual PSA preferences survey, we also asked PSA Directors at hundreds of TV and radio stations across the country “Do you expect your station to have less PSA inventory due to the 2016 elections?” While some of them acknowledged that they really aren’t sure (as they only submit PSAs and don’t actually place them in advertising slots), their answers were not dramatic: 57% of TV stations and 34% of radio stations said yes. (This is also why we focused on TV airings trends for this report.)

That is certainly far from the majority, even on TV, and is only further evidence that any individual PSA campaign will probably only see a limited reduction of airtime during the months leading up to the election. It does not mean that PSAs will completely be off the air and your campaign will be a bust.

Get the full report here: