In a recent Hubspot article, “Why User-Generated Content Is More Important Than You Think” they found that 8 in 10 Gen Y’ers purchasing habits and perception of brand quality are influenced by user-generated content from people they don’t even know and 51% say it is actually more important than the opinions of their friends and family.

So, it got me thinking. Where are the opportunities to put this into practice?  And more importantly, how can we apply that in the world of PSA? Look no further than the issue of distracted driving – an issue that almost daily makes the top headlines of our news for heart-wrenching reasons.

Although all drivers can be distracted drivers, the leading age group is Gen Y.  According to NHTSA’s website and Pew Research, 40% of all American teens say they have been in a car when the driver used a cell phone in a way that put people in danger. Yikes! (That makes me want to freeze my children in time and never let them grow up.) So, how do we get Gen Y to talk to Gen Y and influence their own behavior?  Turns out, there are some great campaigns that are doing this. 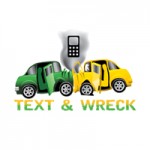 NHTSA launched the Distracted Driving Design Challenge and invited teens to create an original icon with an anti-distracted driving message that could be shared on social networking sites. The winning design was incorporated into USDOT’s distracted driving campaign on Distraction.gov.

A 14-year-old in Florida designed this logo and won, but I bet the number of youth that took the time to design a logo also became more aware of the dangers of distracted driving.

Students at West Valley High School in Fairbanks have taken this issue on as a school.

–  They surveyed their peers to get data on distracted driving.  11% reported that they have texted while driving.
–  They started the “Just Drive” campaign and are holding school assemblies to show their own 1-minute PSA on the issue.
–  Their survey identified the need for alternatives for in-car cell phone use such as putting a cell phone out of reach when driving or settings in a phone that render it unusable while driving.

AT&T “IT CAN WAIT” CAMPAIGN

One of the best examples I’ve seen is the “It can wait” campaign created by AT&T.  According to an AT&T survey, 75% of teens say that texting while driving is common among their friends. This campaign is driven by a corporate powerhouse, but the website is designed and written for Gen Y. The colors, fonts and social media presence all speak to Gen Y.  The site looks like it’s Gen Y talking to Gen Y about “txting and driving…it can wait.”

How do you convince teens they aren’t immortal? AT&T created an emotionally compelling PSA and taken the campaign on the road to make it come to life. They have a text and drive simulator that can be accessed online, but they are also taking this around the country to high schools and having students experience it in person. This is where they get teens talking to one another about this issue and through peer-to-peer influence pledge to make changes to their behavior. In Wisconsin, they recently held a statewide summit on the issue and shared AT&T’s documentary called “The Last Text.” At the same time, they challenged each teen to pledge to not text and drive and encourage their friends and families to do the same through AT&T’s Facebook page. And they also developed an app called Drive Mode that sends an auto reply to an incoming text while a teen is driving.

Project Yellow Light has teamed up with the Ad Council to sponsor a user-generated contest for a PSA concept on distracted driving. Here’s what they are looking for: “A video designed to motivate, persuade and encourage your peers to not drive distracted. You have a unique opportunity to play a key role in spreading this important message. You can speak to your peers on this subject in a way that adults cannot. The more lives you can impact, the more lives you can save.”

Last year’s winner is called “Be a Friend.” The winner is announced during Global Youth Traffic Safety Month in May, not only a perfect tie-in for the message, but a reason for PSA Directors to run the spot nationwide.

If someone asked me to be the creative director on a PSA spot for distracted driving, it would be to focus on this statistic from distraction.gov: texting takes your eyes off the road for 4.6 seconds – at 55mph, that’s driving an entire football field blindfolded. While showing the impact of distracted driving is an emotional sledgehammer (through injuries and loss of life), if the spot actually showed a driver driving the length of a football field with a blindfold it might offer a different perspective.