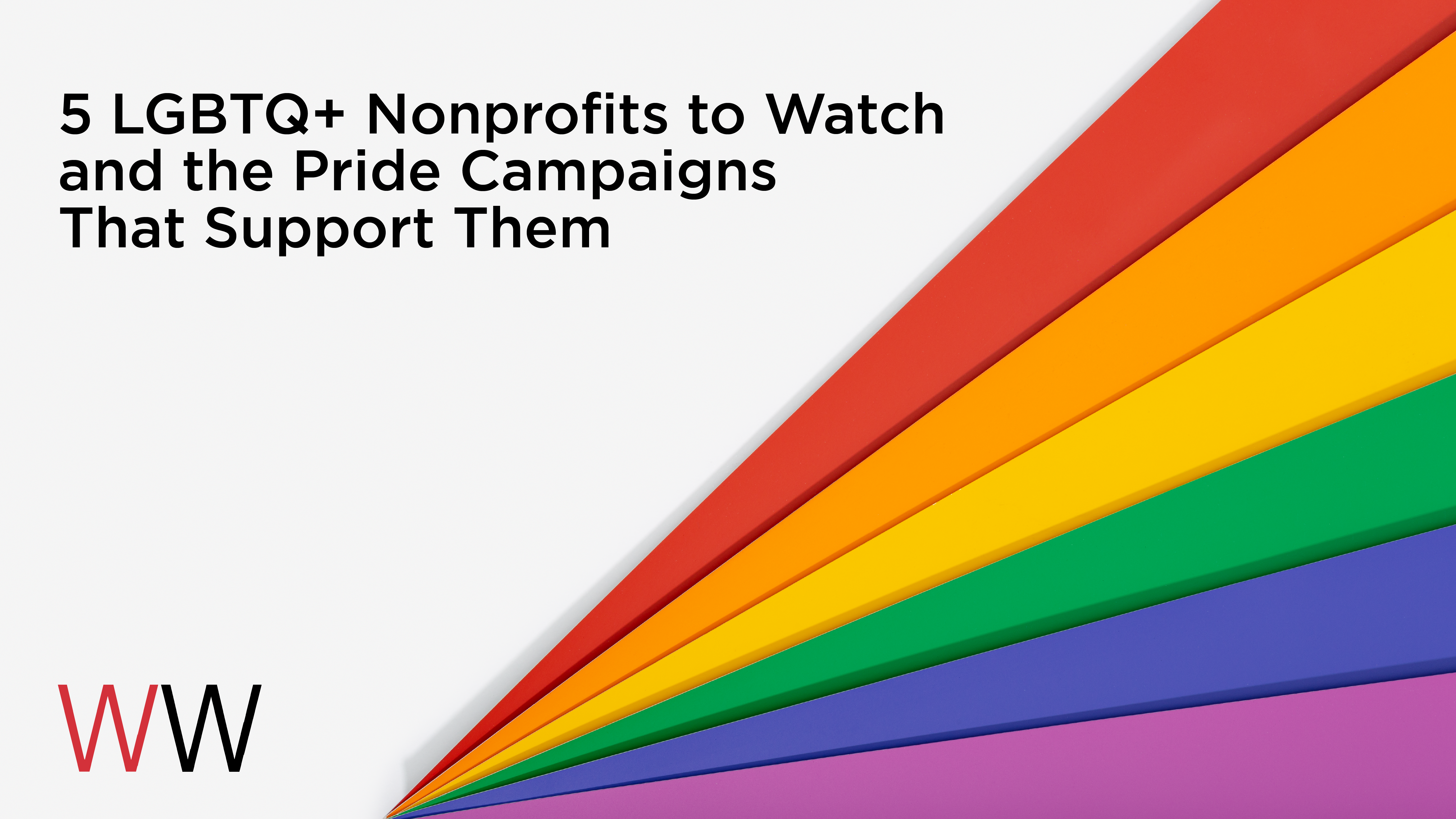 June is Pride Month, a month devoted to celebrating the LGBTQ+ community. The holiday observes the acceptance of differing sexual orientations and remembers the history of those who struggled to fight for the freedom of acceptance and rights as people of the LGBTQ+ community. On June 28, the official date of the first Pride March in New York City in 1970 is recognized with Pride Day. There are many impressive nonprofits working to support this community in a variety of different ways including empowering youth, educating parents and preventing discrimination. We are highlighting our top LGBTQ+ nonprofits to watch and the brands that have launched unique and creative Pride Campaigns to support these nonprofits’ missions.

Nonprofit: It Gets Better Project

The is a nonprofit focused on supporting LGBTQ+ youth. The organization was started by Dan Savage, author of the Savage Love column, and his husband Terry Miller. It all began with a simple social media campaign surrounding the phrase “It gets better” where people shared their stories about how they have overcome facing adversity because of their sexual orientation, especially youth facing bullying from their peers.

Since their start in 2010, over 70,000 people have shared their stories through their organization. Their website features a library of videos of people telling their stories. The organization also provides educational resources that can be used in the classroom to foster understanding and acceptance.

Converse is supporting the It Gets Better Project with their sixth annual Pride Collection. They have debuted several new pairs of shoes that represent how the journey to self-love can be a struggle, but also beautiful and unique. Converse has donated over $1.3 million to support LGBTQ+ organizations. Their funds this year to the It Gets Better Project are focused on encouraging people to be themselves and showcase it on TikTok and Twitch.

The Gay Lesbian Alliance Against Defamation (GLAAD) was founded by a group of journalists and writers that protested outside the New York Post in November of 1995 following defamatory news coverage about HIV/AIDS. The alliance has become a cultural change agent for LGBTQ+ issues including teaching unbiased curriculum on sexual orientation in public schools, exposing fraudulent ex-gay ads from the Center for Reclaiming America and marriage equality.

To celebrate Pride Month and support GLAAD, 1-800-Flowers’ campaign #NoLimitsOnLove aims to inspire more connection and celebration of all people. They created a pride bouquet made up of rainbow-colored roses and will be donating a portion of the proceeds to GLAAD. The campaign has been promoted with an uplifting video featuring a poem from Britt Gambino.

PFLAG prides itself on being the first and largest organization supporting LGBTQ+ individuals, their families and allies. The organization started after Jeanne Manford marched with her son Morty in New York’s Christopher Street Liberation Day March. Her son’s peers came up to Jeanne during the march, begging her to speak with their parents about supporting the LGBTQ+ community. After this, Jeanne began a support group with later grew intro what PFLAG is today operating over 400 chapters in the U.S. that provide support, information and resources for LGBTQ+ people, families and allies.

One of the world’s most famous cookie brands created a touching short film showcasing a parent’s acceptance of his child as they bring home their same-sex partner for the first time. Throughout the film, the father remains quiet and distant from his daughter as she attempts to welcome her partner into the family. The audience questions whether the father is deciding to not accept his child’s sexual orientation, but then you see the heartwarming reveal of his support at the end and can’t help but smile.

This film is a part of the OREO and PFLAG partnership called #ProudParent. This campaign encourages the families and friends of the LGBTQ+ community to support their loved ones in loud and public ways, just as the father did in the film. The overall message is to make the world more accepting, affirming and compassionate.

June is not the only month that Oreo shows its support of the LGBTQ+ community. In October, for LGBTQ+ History Month, the brand released a new Oreo pack with cookies featuring the colors of the rainbow and packaging featuring an image of Oreos in the shape of a heart. There were only 10,000 of these packs made and they were given away through a #ProudParent contest. To enter, people we asked to share their stories about what allyship means to them on Twitter or Instagram, tagging @OREO and using specific hashtags.

The Gay Lesbian & Straight Education Network (GLSEN) organization was created by a group of teachers in 1990 with the goal of creating affirming learning environments for LGBTQ+ youth. Their organization provides evidence-based solutions for educators, advocates for policies to protect LGBTQ+ students and provides opportunities for students to lead GSAs (Gender and Sexuality Alliances) in their schools and communities.

In recognition of the International Day Against Homophobia, Transphobia and Biphobia on May 17, Apple unveiled a new watch band with a wider variety of colors beyond the typical Pride rainbow flag. The added colors include black and brown to represent the Black and Latinx community and those who have passed or are living with HIV/AIDs. The light blue, pink and white represent transgender and nonbinary individuals. The importance of adding these additional colors is to honor those Black, Brown and transgender activists that had a lead role in the fight for equality and the need to continue to work towards improved equality for these diverse and intersectional groups.  Apple supports GLSEN as well as the Human Rights Campaign, Trevor Project and LGBTQ+ education civil rights campaign.

On June 12, 2016, 49 people were killed in a shooting at the Pulse Nightclub in Orlando, FL. The owner of Pulse, founded the onePULSE Foundation to support a memorial for the victims and a museum that educates and encourages conversation about the tragedy and the world’s response to it. The organization also provides a scholarship to students who desire to pursue fields of interest that are similar to those of the victims of the shooting, 49 scholarships were awarded for the 2020-2021 academic year.

Calvin Klein’s Pride campaign called #ProudInMyCalvins features photoshoots of several members of the LGBTQ+ community in intimate settings such as their homes talking about the moments they most felt like themselves. Makeup artist Raisa Flowers who has worked with celebrities such as Rihanna was a part of this campaign and discusses the pride she feels being a black, queer and plus-sized woman. Last year, Calvin Klein and its parent company PVH Corporation provided a $1 million grant to support the construction of the memorial and museum as well as a scholarship in memory of a victim and former Calvin Klein manager, Frank Hernandez.

Founded in 2002 after the tragic death gender-nonconforming homeless teen who made it his mission to advocate for LGBTQ+ youth. The Ali Forney Center provides meals, medical and mental health services and a housing program. Since 2015, the organization’s Drop-In Center in Harlem has been recognized as the nation’s first 24-hour drop-in program for LGBTQ+ youth. The Center provides community, education, job training, showers, HIV support and case management.

One of the most popular pieces of exercise equipment, Peloton, is taking a stand for the LGBTQ+ community. The company already has Peloton groups such as #PelotonLGBTQX and #TransPride, and will add new music, themed classes and apparel for Pride Month. They are not just about celebrating, but are also making a financial contribution to the cause by donating $100,000 globally to LGBTQ+ organizations one of which is the Ali Forney Center.

These nonprofits and campaigns represent just a few of the many nonprofits that support many different needs and niches within the LGBTQ+ community. They all have one thing in common, making our world a better place where everyone is shown respect and acceptance. If your nonprofit needs help planning its next campaign, please reach out to our team and we would be happy to help.