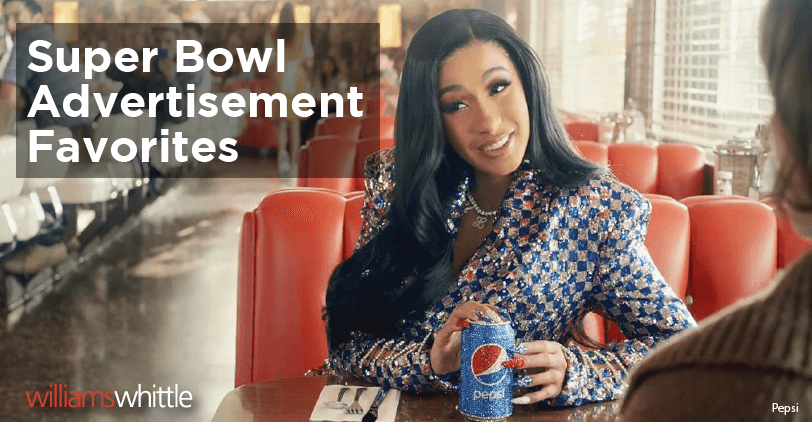 The Super Bowl is never just about the game, but also the unveiling of the most talked about advertisements debuting during the commercial breaks. At $5.2 million a pop for 30 seconds of air time, the Super Bowl is a huge opportunity for brands to market to 98.2 million viewers. As advertising professionals, of course, some of our first chats this week have been about which advertisements were our favorite, so we decided to round up the input from our Williams Whittle team on which ones we enjoyed the most.

Game of Thrones/Bud Light – I read that their strategy was to have an advertisement in each quarter. They were all different executions and appealed to all fans. Very well played. My favorites were the one about corn syrup – very bold move to use their competitor’s name on this ad and the one with recreating the Game of Thrones fight between The Mountain and Oberyn Martell… just wow! I’m a Game of Thrones fan and April can’t come soon enough! Two great brands co-sponsoring an advertisement

Pepsi – This advertisement was super funny and so true. Every time you go to a restaurant and they don’t have the soda you want to order, they will say “we don’t have X, but we have Y – is that OK?” So, they took an everyday expression and turned it in their favor. Amazing! Plus, I love Cardi B and Steve Carrell. The fact that Steve tried to imitate Cardi’s “okuuuurrrrr” was hilarious!

Audi – It was memorable, laugh out loud funny and light-hearted while still keeping Audi’s look and feel. This was not something Audi typically does in their advertising which made it stand out more.

Planters – This was funny and relevant. Again, not something Planters usually does in their advertising. I loved their use of Charlie Sheen. The only downside to this is Charlie Sheen is not as relevant as he was eight years ago so the younger demographic wouldn’t get this advertisement as much, but I don’t think that’s their target.

Google – The more emotional advertisements appealed to me this year. Google particularly, really tapped into the human emotion of their brand. It is comforting to know that the most translated phrases are “how are you”, “thank you” and “I love you.” This advertisement was heartwarming.

Microsoft – Microsoft also decided to tug at the heartstrings. There is always something powerful about customer testimonial and this advertisement for the Xbox Adaptive Controller really sold me.